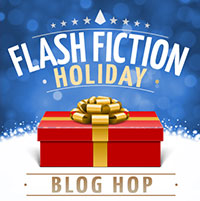 I’m thrilled to be participating in the Flash Fiction Holiday Blog Hop! All stories in the hop are inspired by the picture below and must contain a “bad boy” character and a winter holiday theme. I hope you like my offering. Leave a comment and you’ll be entered to win your choice of any book from my backlist. 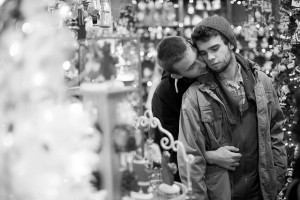 “Come on, man. I don’t need any presents okay,” Kyle tried to pull away from Brad’s hug, but Brad just tightened his arms and leaned in, kissing his neck like he didn’t care who saw.

“Everybody deserves presents and you’ve been talking about how much you wished you had a tablet for ages.”

“Yeah, but I don’t expect you to buy me one, okay. If I could find an employer willing to take a chance on a loser with a record I could save up for my own.”

Brad sighed. “I already told you my dad would be willing to vouch for you.”

“I didn’t even mean for your parents to know who I was.”

“I thought we were past that.”

He heard the anger in Brad’s voice, but all he did was huff.

Brad leaned over and reached out for a bottle of sparkly bath salts from a display in front of them. Kyle hadn’t even noticed that he’d wandered into the bath department. He’d simply wanted to get away from the electronics he couldn’t afford.

“How about this then? You surely can’t argue it’s too expensive.”

Kyle didn’t want to laugh, but he couldn’t help himself. Brad managed to ask the question in such a serious voice.

“Only if you plan to use them with me.”

“Now that sounds appropriately kinky.” He let go of Kyle and turned, glancing around the store. “Now where’s the check out.”

“Give me those.” Kyle yanked the bath salts out of his hand and set them back on the display shelf.

Brad laughed. “You sure?”

“If we leave, you’re coming back to my house,” Brad insisted. “I don’t see why you won’t just move in.”

Brad shook his head. “When are you going to get it?”

“Get what?” Kyle’s face burned from embarrassment. He looked around to see if anyone was watching, but most people seemed too caught up in their holiday shopping to pay attention to anything but the array of goods for sale.

Kyle took a step back and nearly knocked over a display of heavily scented lotions. “You what?”

Brad smiled. “I love you. And I don’t care who you used to be. I only care about who you are now.”

“I’m still that guy. I’m still the guy who used to steal anything I thought I could re-sell.”

Kyle stared at him, unable to really comprehend what he’d said. A knot formed in his throat and his eyes stung. Holy fucking fuck! He was a hardened criminal not a crybaby. “I’ve got to get out of here.”

He took off running, only thinking of how he had to get somewhere he could breathe. The tightness in his chest seemed to cut off his air. He raced through the mall and finally came to an exit. He burst through the door, starling an older couple who were coming in.

Once outside, he sat on a bench and gulped the chilly air. So much better, not trapped, not scared. No one had ever told him they loved him. No one. He’d never met his dad, and his mom was more concerned with what he could get for her than taking care of him. Eventually, she disappeared and he was on his own. And he’d been fine like that. Until Brad.

He heard footsteps, and without looking, he knew Brad had found him. Brad would always find him.

“No one ever said that to me.” Kyle still didn’t look up.

Brad sat beside him and laid a hand on his back. “I’m sorry, but it’s how I feel.”

Those words made him turn around. “Don’t apologize. I love you too.” His mouth dropped open after those words came out. He’d meant to say “I don’t need you feeling bad.”

Brad cupped the side of his face and kissed him, a quick gentle kiss but one that heated him from head to toe. “You are all the Christmas present I need. Will you come home with me?”

“Will you let my dad be a reference for you?”

Kyle’s natural stubbornness rose up. He wanted to refuse again, but it was pointless, Brad would eventually wear him down. “Okay.”

Brad grinned. “And that is all the Christmas present I need.”

Kyle gave him a sly grin. “So I should just return the—“

Brad laid a finger over his lips. “Absolutely not. And I’m not making any returns either.”

Kyle narrowed his eyes at Brad.

But brad kissed him again. “Let’s wait a little while to argue more about gifts.”

All Kyle could do was smile. “Fine. Now let’s go home.”

Check out the other blogs in the hop. There are lots of great stories!